protein gel that captures and traps viruses and bacteria directly in the water. With this simple yet revolutionary idea, researchers at the Istituto Zooprofilattico Sperimentale delle Venezie (IZSVe) promise to change aquaculture in the near future. The PathoGelTrap project aims to innovate infectious disease management practices by providing the industry with a technology that can effectively remove specific pathogens directly from the water.

Thanks to decades of experience in the field of fish pathology and the availability of an authorised experimental aquarium, researchers at the IZSVe National Reference Centre for fish, mollusc and crustacean diseases will test the effectiveness of intelligent proteins in detecting and inactivating pathogens, providing a sustainable alternative to disease management in aquaculture. The research project is part of the H2020-EU.1.2.1 – FET Open Programme, the European Commission’s instrument that encourages and supports radically new ideas for future scientific and technological research. 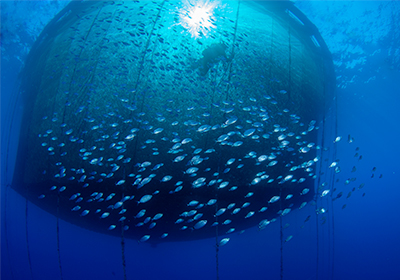 aquaculture
IZSVe is participating in the PathoGelTrap project, an international research project that aims to produce a protein gel that captures and traps fish viruses and bacteria directly in the water, to solve the infectious problems of intensive farming and promote sustainability.

Aquaculture is the most productive farming system in recent years. However, intensive farming models are subject to infectious problems that drastically affect fish health, food production, the environment and the industry’s profits. Current strategies to control and prevent infections in aquaculture (mainly vaccines and antibiotics) have major drawbacks, which pose major questions for the future sustainability of global fish production.

To address this issue, the PathoGelTrap project plans to use current knowledge on the self-assembling properties of liquid-liquid phase separation proteins (LLPS) and affibodies (AFB) to construct a chimeric biomimetic material (LLPS-AFB chimera) that will effectively recognise and trap fish pathogens (both viruses and bacteria) directly in the water and inactivate them. Due to the versatility offered by LLPS proteins, two different solutions are expected to be provided to the industry:

Liquid PathoGelTrap: the LLPS-AFB protein acts as a flocculating agent to be added directly into the fish culture water. The protein will bind the target pathogens in the water and subsequently self-assemble into liquid droplets that will turn into hydrogel, which in turn will drag the pathogen to the bottom;
PathoGelTrap filter: a specific LLPS-AFB hydrogel will be produced to be used as a pre-formed filter that will trap pathogens as they pass through the plant’s normal filtration systems, returning “cleaned” pathogen-free water to the environment.
With total funding of €2,996,437.50 and 6 European partners (from Spain, Italy, Ireland, France, Poland), under the coordination of SMARTWATER Fish Farm Software Solution SL (Spain), the PathoGelTrap project represents a significant advance in biomaterial engineering, opening the door to a very promising approach for infectious disease control in aquaculture.